Cutaneous metastasis occurs when cells from a cancer in the body spread to the skin. While most internal cancers can metastasize to the skin, breast cancer is one of the cancers that most commonly metastasizes in this way. CMBC generally occurs within a few months after primary breast cancer but can even develop decades after the initial breast cancer and its subsequent treatment. Left unchecked, CMBC can become a highly morbid form of breast cancer characterized by unrelenting progression of multiple cutaneous tumor masses, especially following mastectomy.

In most cases, surgical excision of the CMBC tumors is not practical. The current standard of care includes radiotherapy or chemotherapy, but these therapies tend to be inadequate given the well-known dose limiting toxicities, limited efficacy, and/or side effects.

Patients with CMBC typically present clinically with the following symptoms:

In four Phase 2 and/or Phase 3 clinical trials in CMBC , primarily targeting patients who had previously failed radiation therapy, our REM-001 Therapy was able to reduce or eliminate a substantial number of the treated CMBC tumors. 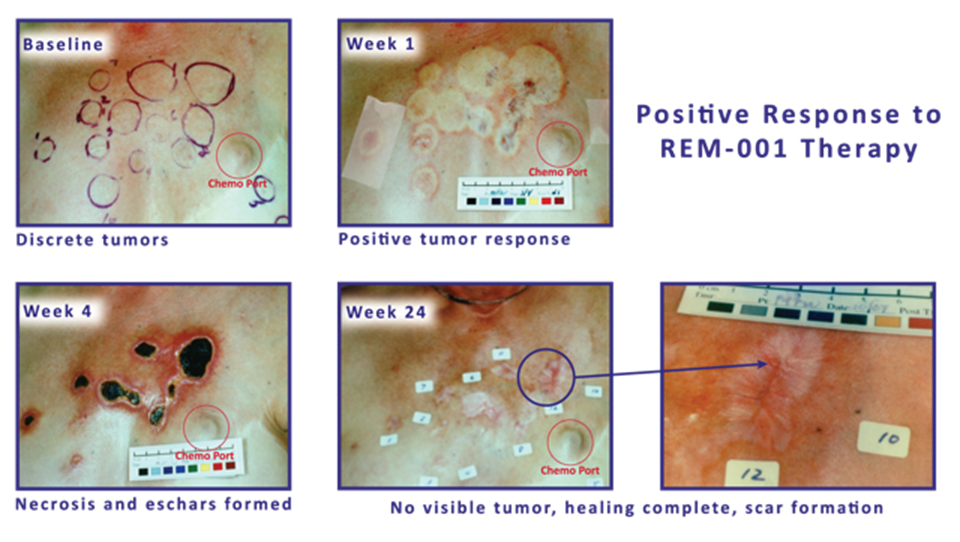 Specifically, our analysis of the data collected from these trials (shown in the chart below) indicates that in approximately 80% of evaluable tumor sites treated with REM-001 Therapy, there was a complete response; meaning that follow-up clinical assessments indicated no visible evidence of the tumor remaining.

PDT is a treatment that uses light sensitive compounds, or photosensitizers, that, when exposed to specific wavelengths of light, act as a catalyst to produce a form of oxygen that induces local tumor cell death. This form of oxygen is known as reactive oxygen species or ROS.

REM-001 Therapy as a Potential Immunotherapy

It has been well known for some time that PDT, including REM-001, can induce tumor death by apoptosis, necrosis or vascular shutdown. In fact, the most early applications of PDT were based on preclinical research that had established the dosing schemes necessary to induce one or more of these effects. However, PDT's ability to induce an immune T-cell response was not recognized until much later. There is ongoing preclinical work that has demonstrated that PDT can provide a highly promising tumor immune response in animal cancer models and we anticipate this work may lead to clinical applications of PDT in a role as an immunotherapy. One possibility is the use of PDT to induce the release of tumor specific antigens that stimulate dendritic cells, thereby activating the body's immune response to attack metastatic tumor cells. As our development of REM-001 Therapy in the treatment of cutaneous cancers progresses, we anticipate we will be well positioned for potential further clinical development of our therapy as a key element in an immunotherapy regimen.

In the case of cutaneous treatment, our light delivery device is a wand that consists of an optical fiber with one end connected to the laser and the other end modified to allow it to be easily positioned to deliver a uniform light treatment field to the tumor. For internal cancers, PDT uses a light delivery medical catheter that contains an optical diffuser. Here again, one end is connected to the laser light source, but the catheter diffuses this light to illuminate the tumor.